Sometimes you just need to get away.

Sometimes you just need to get away… away from the daily grind, away from schedules… away from… well… just get away from it all. I recently had such a moment and feel very fortunate that I have the ability to take advantage of those times when they come along. In this instance, getting away simply involved throwing my camera equipment into the car and going for a drive with no destination in mind. There is something truly freeing and rejuvenating about that.

Once I started driving, I got the idea in my head that I would try to follow Route 66 West. I had partially done that in the past and thought it might make an interesting drive to do it in its entirety. Well, that quickly hit a snag somewhere around St. Louis, Mo. Apparently the area is some sort of GPS Bermuda Triangle – Either that or the two GPS devices that I had, decided that since I had nowhere to be they weren’t going to bother giving me accurate directions. After a long day of driving I stopped for the night somewhere outside of Dodge City, KS (popularized by the old western series Gun Smoke), but nowhere near Route 66.

The next morning, I start out at the ungodly hour of 4 AM. After quite a few hours and dealing with AT&T tech support about their crappy coverage, I had to make a brief unexpected stop due to a miscalculation of mileage versus actual remaining gas in the tank. Fortunately, I was once again on my way thanks to a small amount of luck and excellent timing by a New Mexico State Trooper. The first stop of the day was White Sands National Monument in New Mexico. I had been to the Great Sand Dunes National park in Colorado a number of times before, so I thought I knew what to expect. If I learned one lesson at the moment I entered the park, it was to throw out all preconceived expectations. Sure, there were similarities to the Great Sand Dunes, if you want to call the fact that they both have sand, a similarity. The fact is White Sands is quite different. There is an almost magical quality to what appears to be an endless sea of rolling white waves punctuated by small sparse islands of vegetation. The formations of gypsum crystals sparkle in the sun light like small diamonds that have been sprinkled at your feet. Needless to say, regardless of the image it may conjure for you it is quite a beautiful place. This time of year, the temperatures are starting to fall so there are not many other visitors to contend with when setting up your shots. Early morning definitely provides the best photographic opportunities as the night winds will generally clear the footprints of the few other visitors and truly give you a true sense of isolation. In my case, it was not just a sense of isolation, but true isolation as I was actually the only person in the park over night. 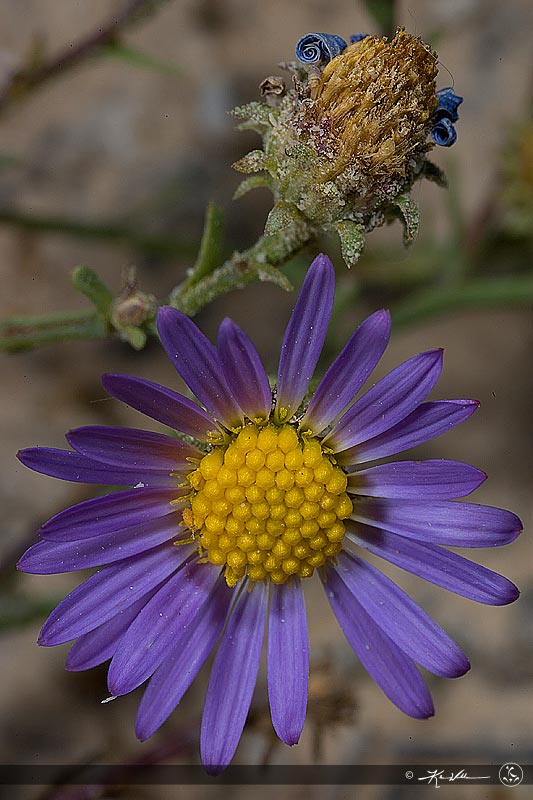 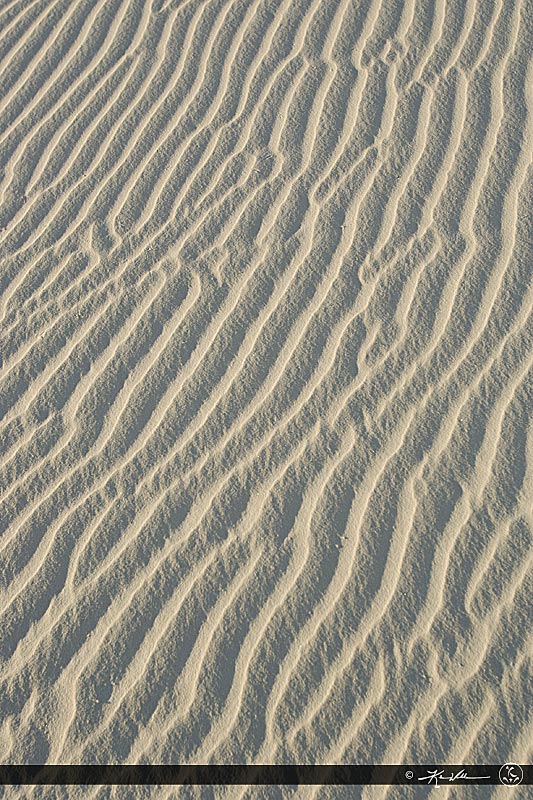 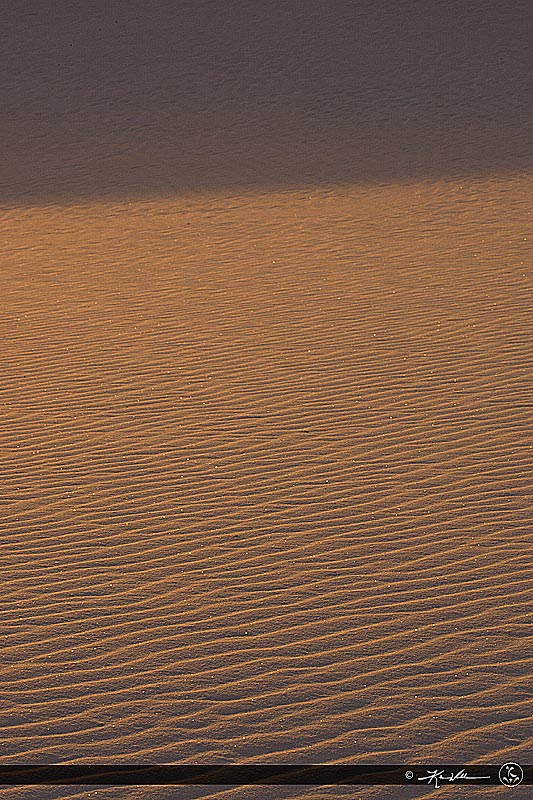 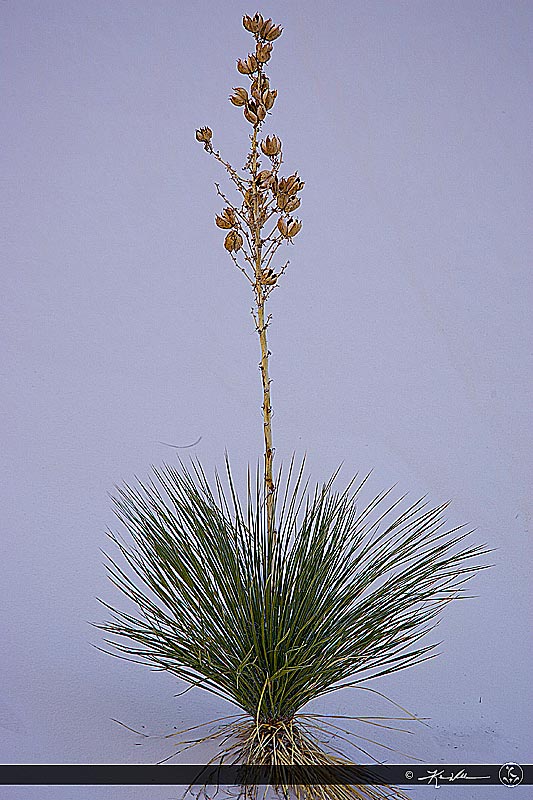 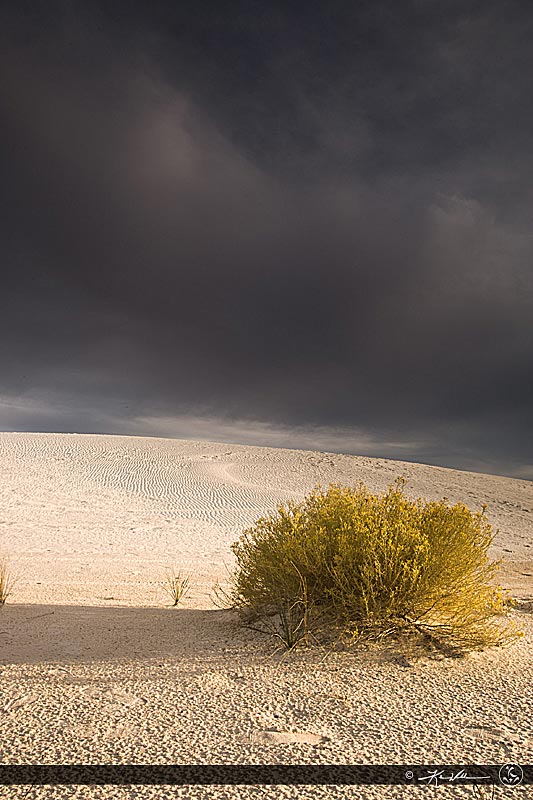 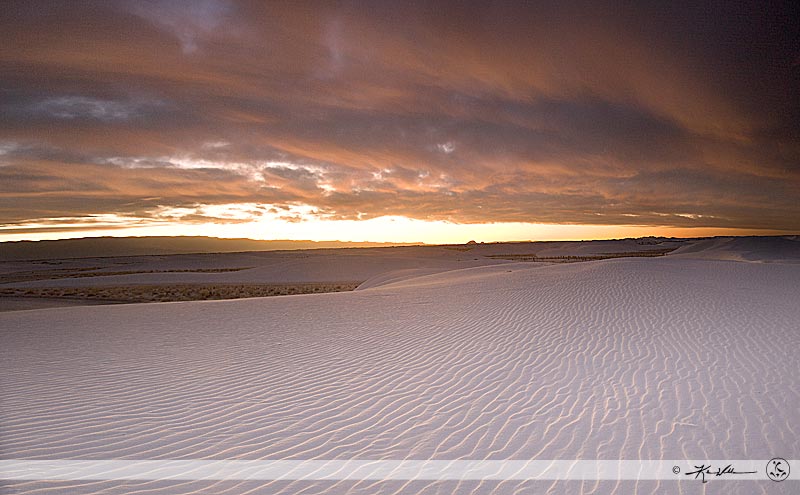 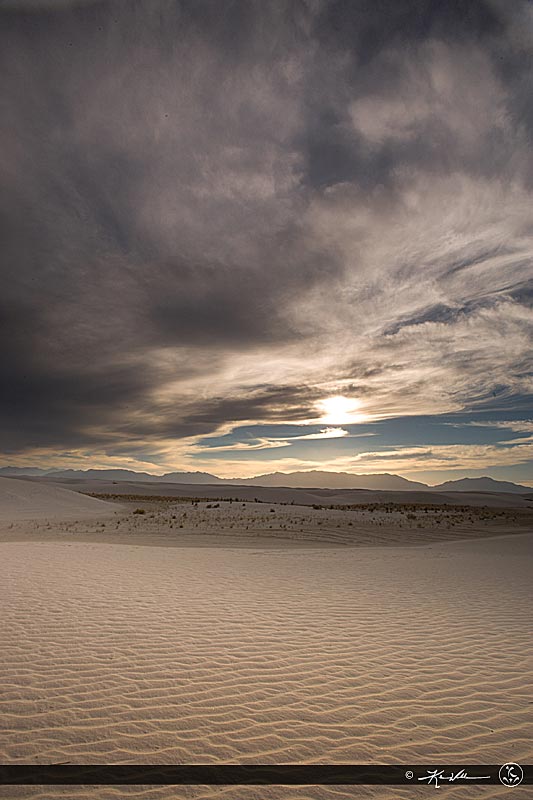 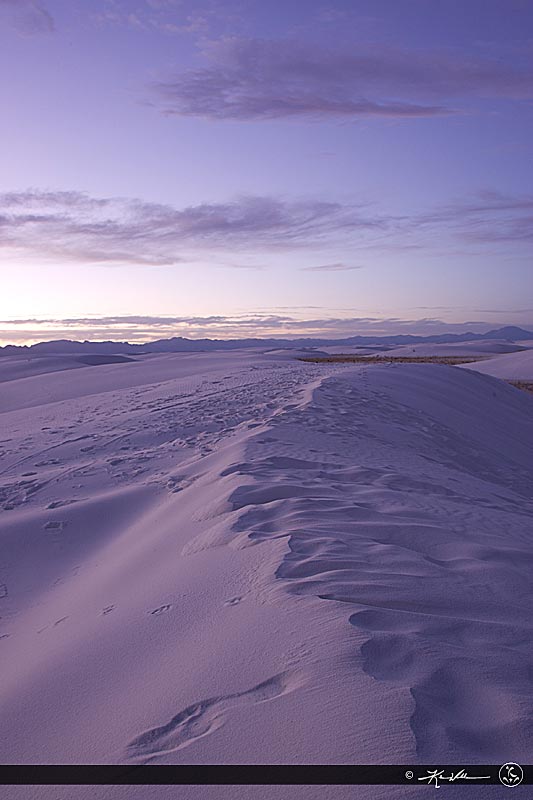 The next stop took me to Carlsbad Caverns National Park in New Mexico. I have to say I started to become a bit frustrated with my GPS heading to Carlsbad, as it really had no clue of what it was talking about or where it was taking me. Good thing for me, I'm not like most men and I'm willing to stop and ask for directions. 754 feet below ground is where you'll start your trek at Carlsbad should you opt to take the elevator down rather than following the natural entrance. From a geological viewpoint, the caverns are amazing. The immense size of some of the formations and the Grand Hall should induce a sense of wonder in even the most uninspired visitor. Of course, from a photographic viewpoint I found the lighting to be a bit frustrating. Especially when you setup for a 30-second exposure and a tour guide decides to turn the lights off. That of course, simply meant I had to put in a little more effort to prove my worth as a photographer. A tripod is an absolute necessity in a situation like Carlsbad. From past experiences, I knew a flash would spoil the mood of the environment so I chose to use a technique referred to as "Painting with Light" to achieve my goals. That technique not only allowed me to fill in some of the shadow areas, but to also introduce a bit of extra color as the color temperature of my halogen flash light was different than that of the lighting used to illuminate the cavern. 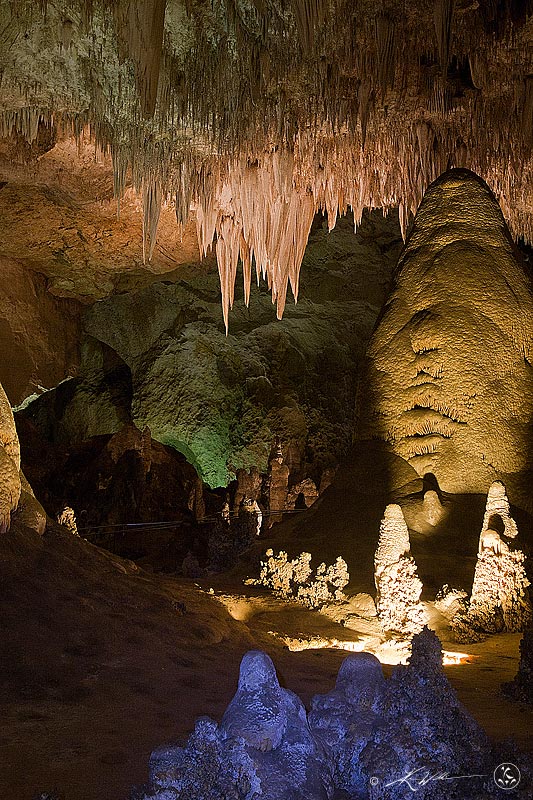 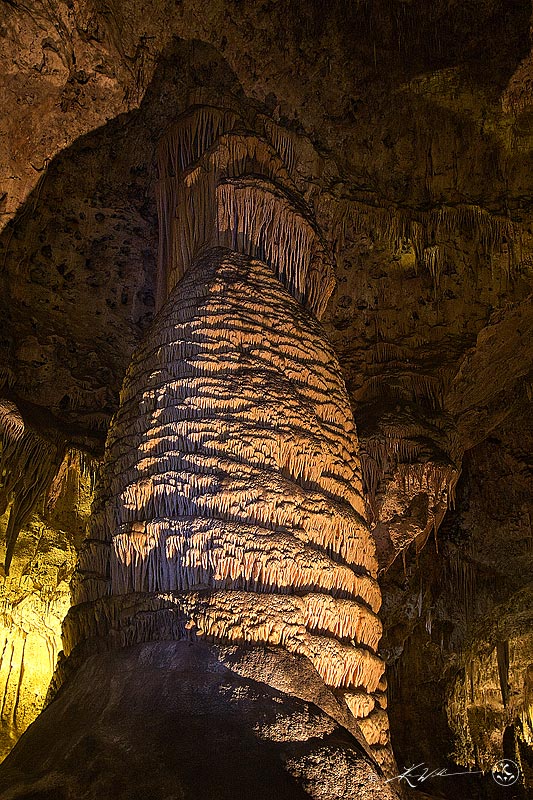 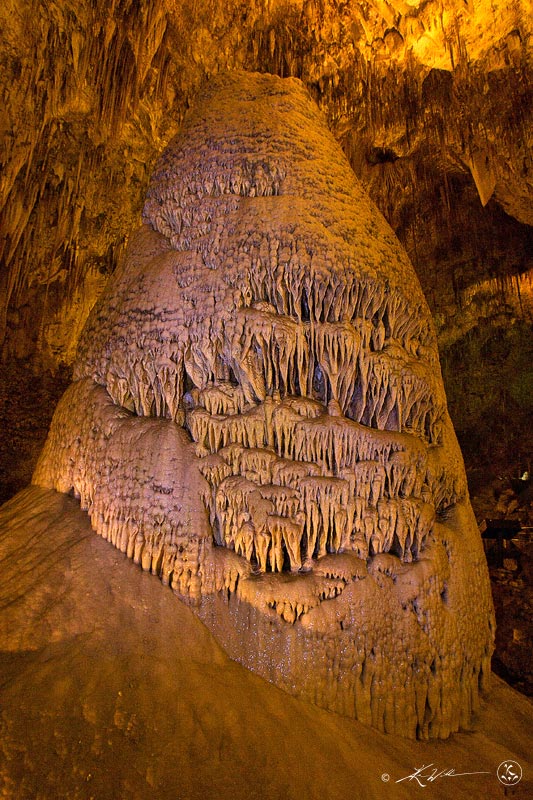 Next was an "I'm in the area, so why not" kind of stop. A simple case of curiosity took me to Roswell, New Mexico. I'm not really sure what I was hoping to see... strange lights in the sky or maybe even unidentifiable green men with big eyes running across the road out of town. While I didn't see any of that, at the very least I can say I had a great California Burger at Pepper's Bar & Grill. As for the rest, well, I guess Roswell has the same issue my previous stops had... a lack of visitors due to the season.

This morning started out at 2 AM. That simple fact made my frustrations with regard to the GPS directions, or in this case, I can say a lack there-of even more aggravating. I was starting to recognize a theme with the GPS, and that was that none of the National Parks are registered in it. I was hoping to make it to the South Rim of the Grand Canyon National Park by sunrise to get some early morning shots illuminated by the warm glow of the sun. Well, due to the little GPS issue that didn't quite work out, regardless of how hard I pressed the gas pedal. I did arrive shortly after sunrise though and the colors were still quite beautiful. It was however what felt like 20Â° out with strong winds that made me wish I had planned a bit better than simply jumping in the car. Luckily, I do keep a few extra supplies in the car this time of year that came in very handy, like hand warmers, a hat and light gloves to allow me to operate the camera. Overall, it was a great day. After all how could it not be; there was no schedule, barely any expectations and I was at the Grand Canyon. After shooting there for most of the morning and getting some decent shots, I was off to find the next location. 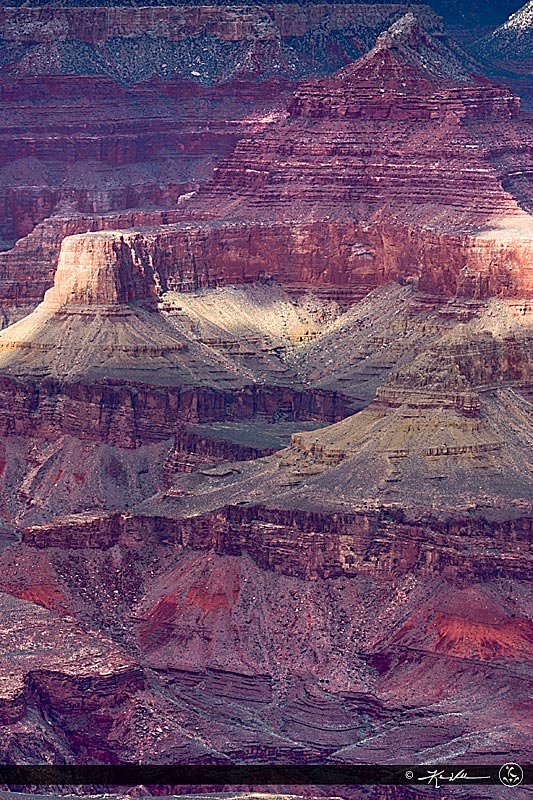 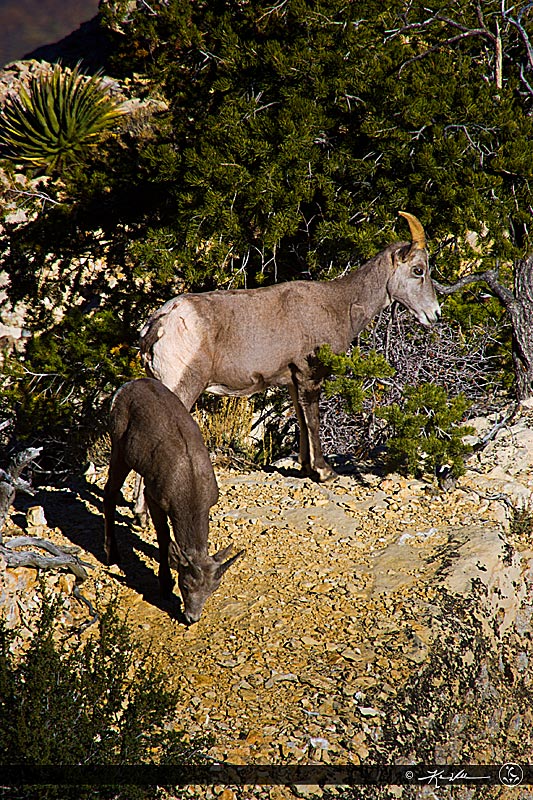 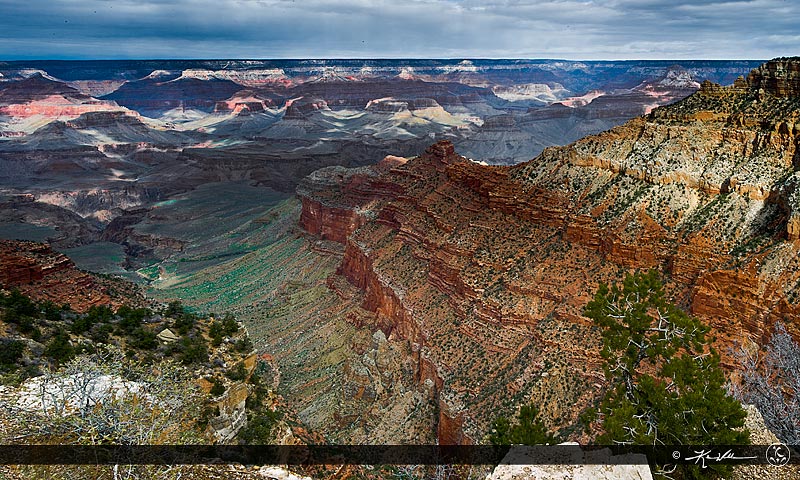 The first stop this morning offered a few surprises as well as a few personal realizations. There is definitely something about time alone on the open road viewing some of the most beautiful landscapes, which inspires a bit of self-reflection. I've always had a bit of fear about traveling alone... mostly because I tend to be an introvert and have a hard time striking up a conversation with random strangers. It seems however, that in the absence of more dominant or extroverted personalities, I do just fine and as a result, I met many interesting people. Of course, the true test of that will be traveling abroad alone, but that's a story for a different time. Anyway,Page, Arizona is definitely an underappreciated jewel in the vast array of gems that Arizona has to offer. I arrived in Page with one destination in mind... a tour of Antelope Canyon. As it turns out, Page has quite a bit more to offer - Lake Powell, the Glen Canyon Dam and Horseshoe Bend are but a few of the beautiful destinations in the Page area. I decided last night that I would start bringing my journey to an end, so unfortunately I wasn't able to make it over to Lake Powell or the Glen Canyon Dam, as I am now on a quasi schedule. That being said, I guess I'll just have to come back at a later date.Antelope Canyon was all that I had hoped for and in some ways more. With formations that resemble flowing folds of ribbon more than it does stone combined with colors that seem to come out of nowhere when the light hits just right, it's understandable why so many photographer make their way here. The moment was made more poignant as the melodic tones of a traditional Native American flute played by one of the guides, echoed throughout the chamber. This is definitely another location to which I will have to return as the allotted 2 hour window vanished much too fast. 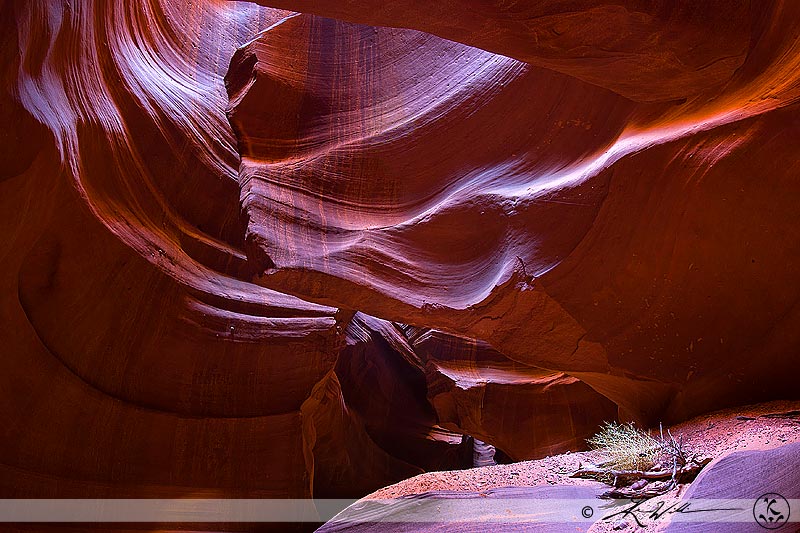 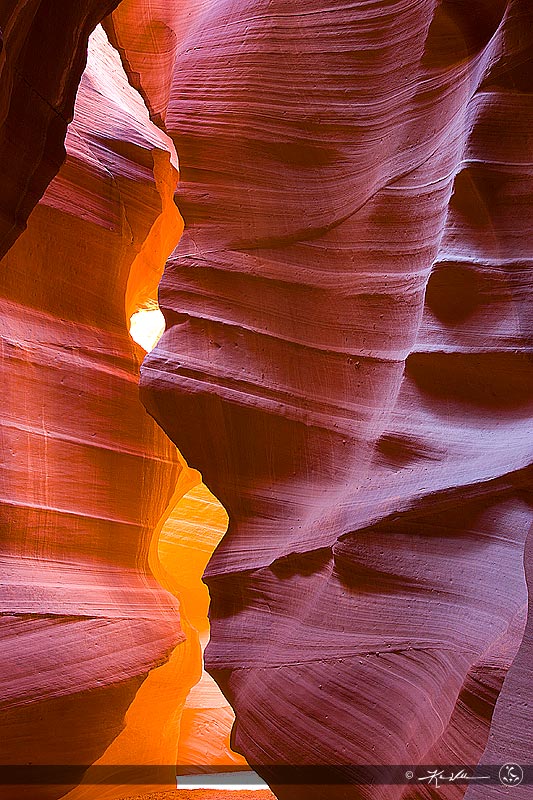 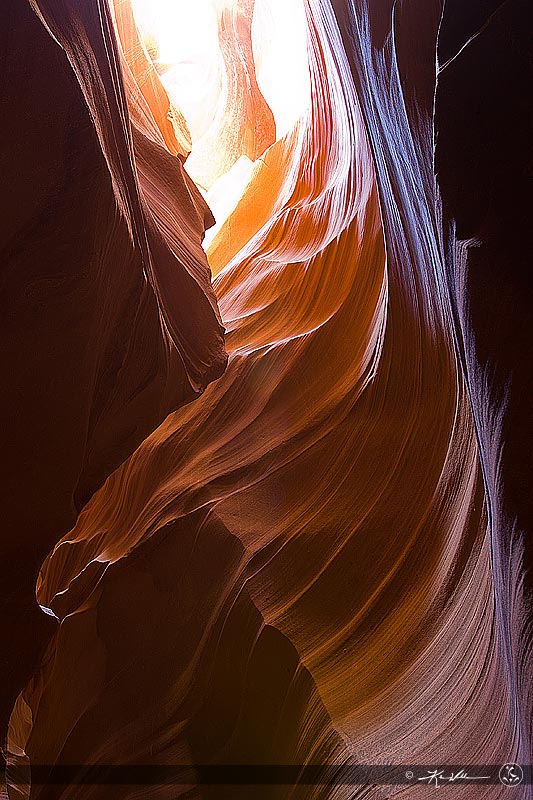 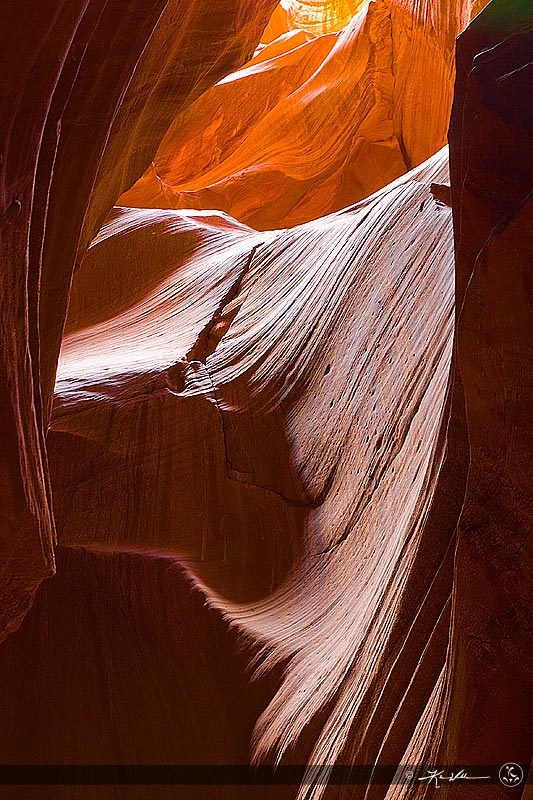 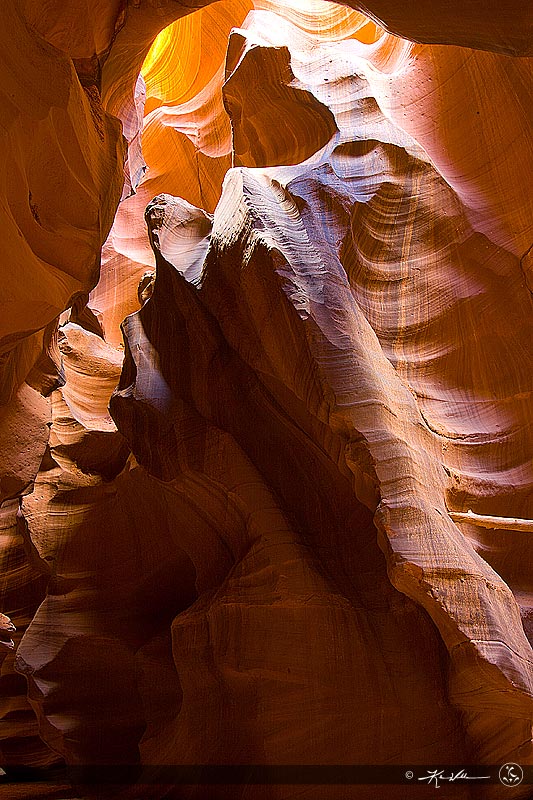 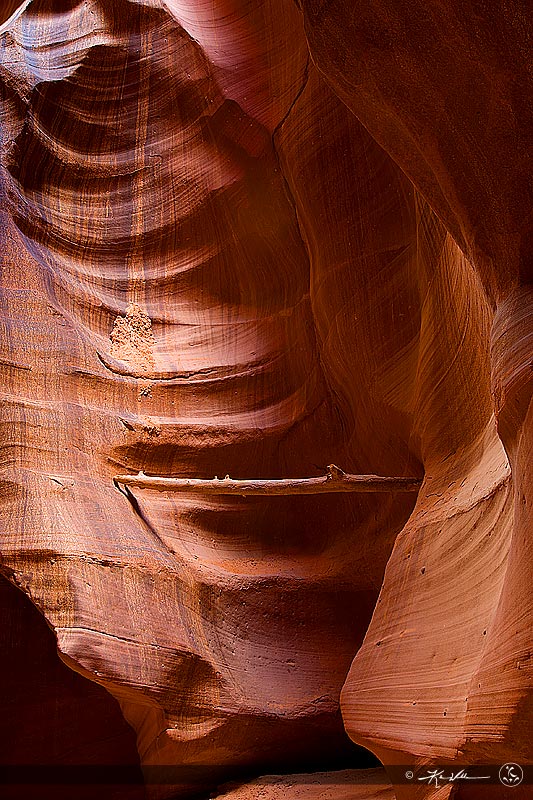 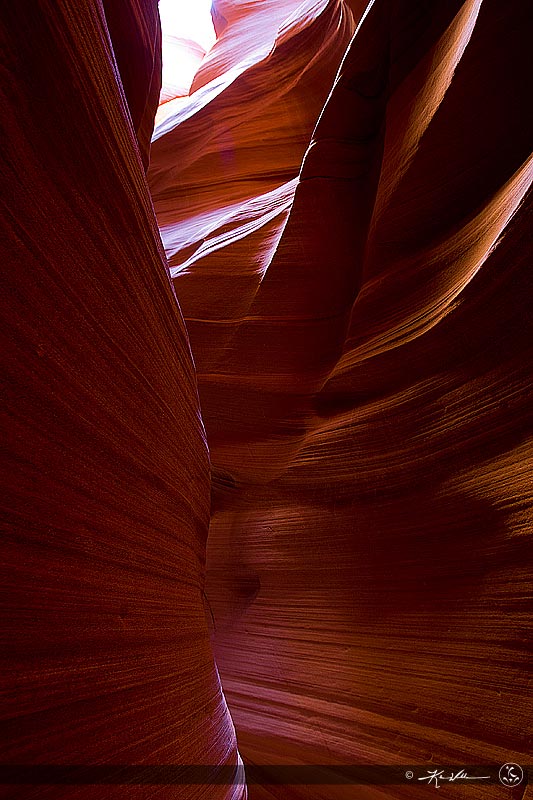 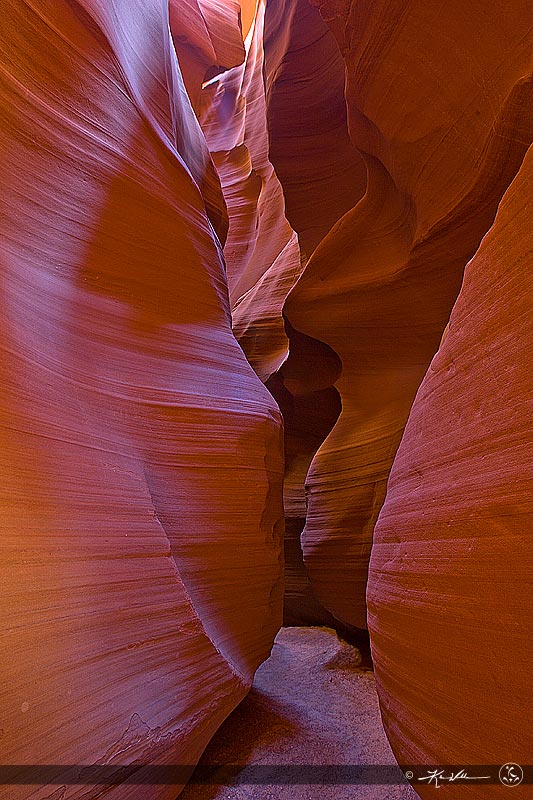 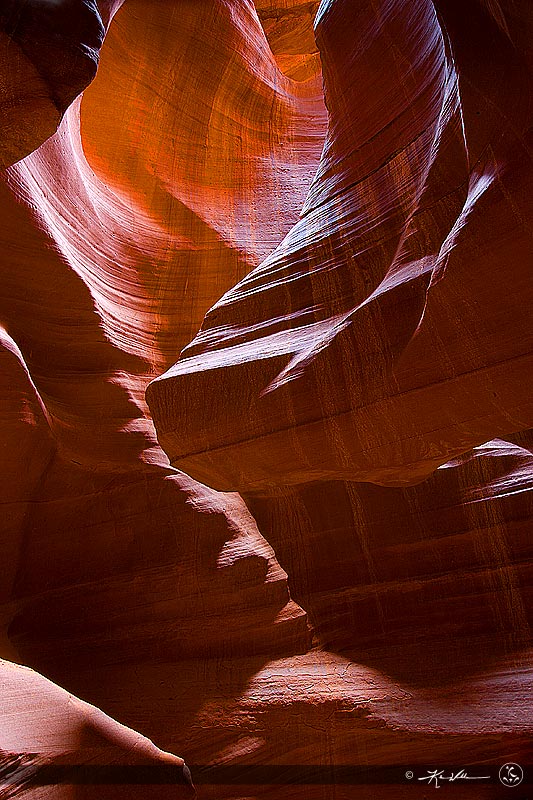 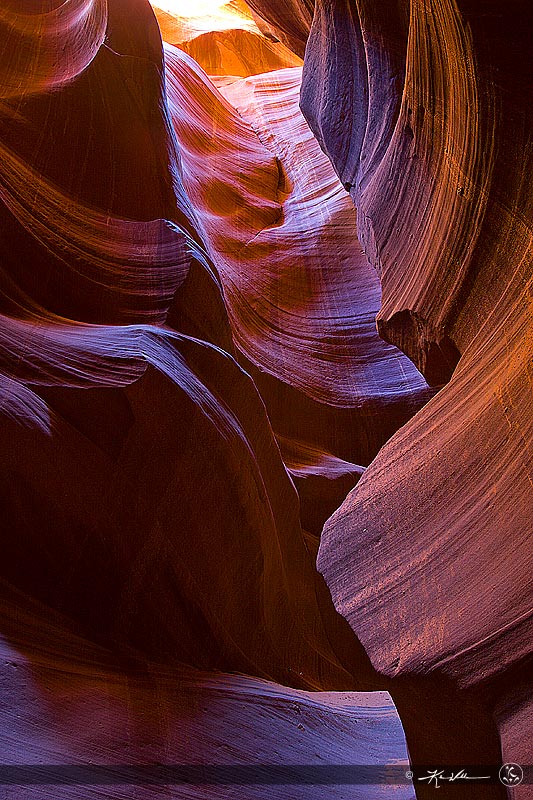 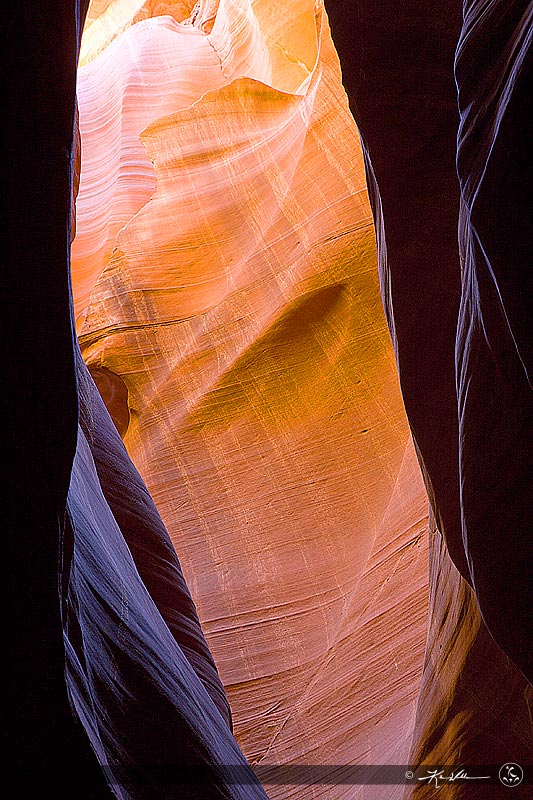 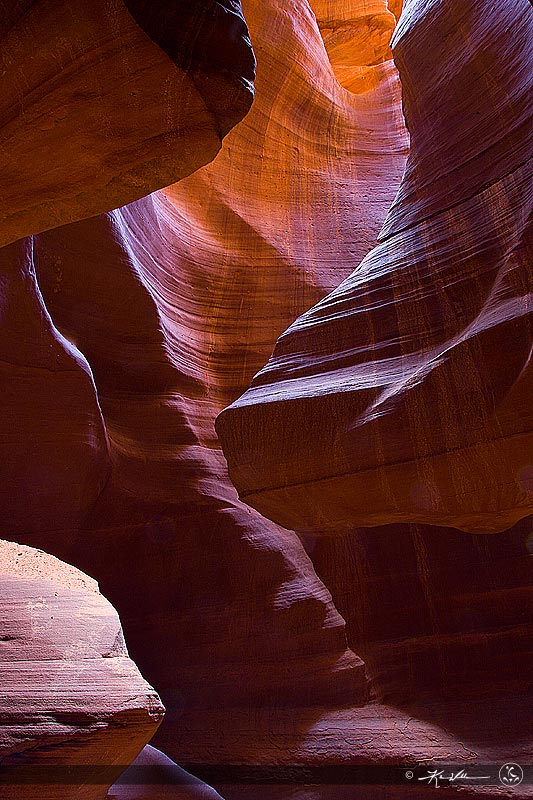 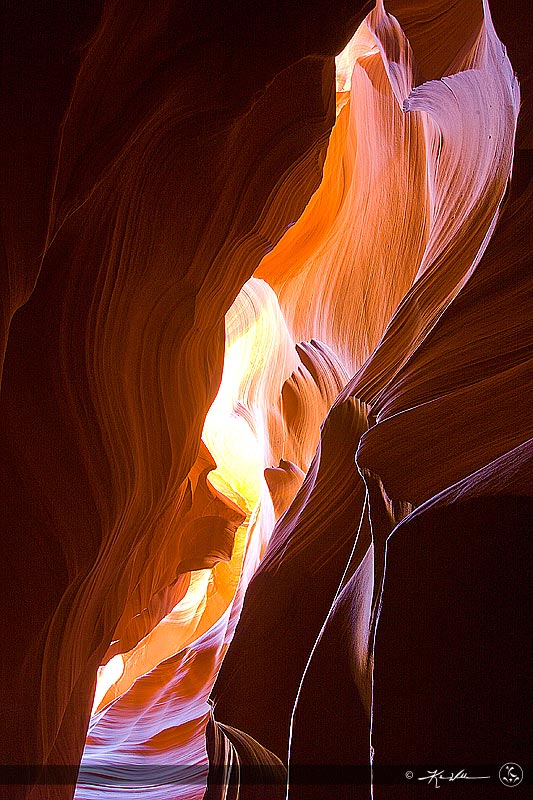 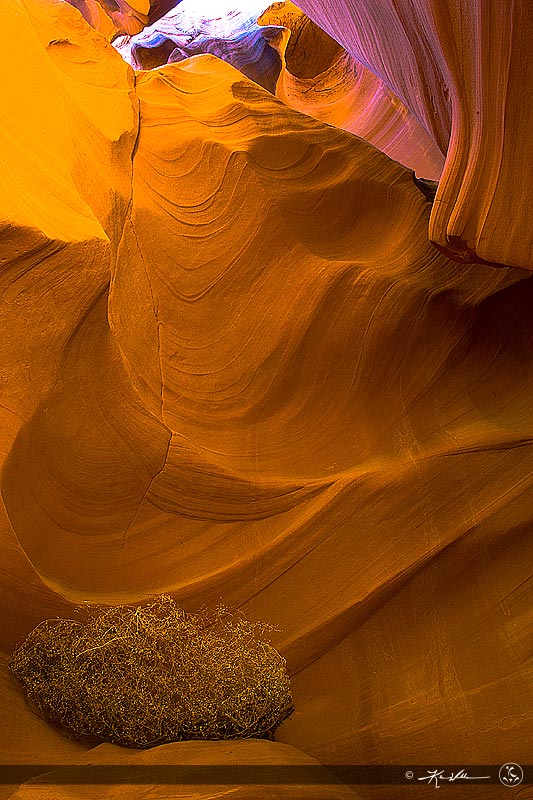 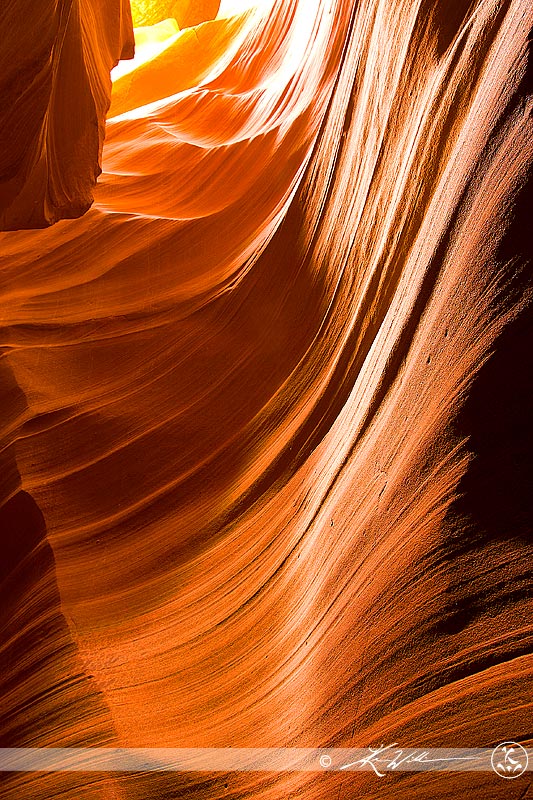 Upon leaving Antelope Canyon, I had one quick stop to make on the way out of town – Horseshoe Bend. I had seen photos of Horseshoe Bend in the Antelope Canyon tour office and knew I had to make an attempt to shoot it before leaving the area. I was initially skeptical of my chances for getting any decent shots as it was almost noon, but after speaking to the other photographers after the Antelope Canyon tour about it; I had a renewed sense of hope. Their descriptions of the area quickly made me realize that noon might be close to the best time to actually get the shot. With the way the formation is situated, having the sun low in the sky would cast too many heavy shadows in all the wrong places. Luckily, I was prepared for what to expect when arriving at Horseshoe Bend. There are no guardrails and the best way to get a full shot of the Bend was to lay on your stomach and extend the camera out over the edge -Definitely not for the faint of heart and all possible precautions should be taken – in other words, you do this at your own risk. Using a simple split grad, I was able to get exactly what I wanted then I was off to my next stop. 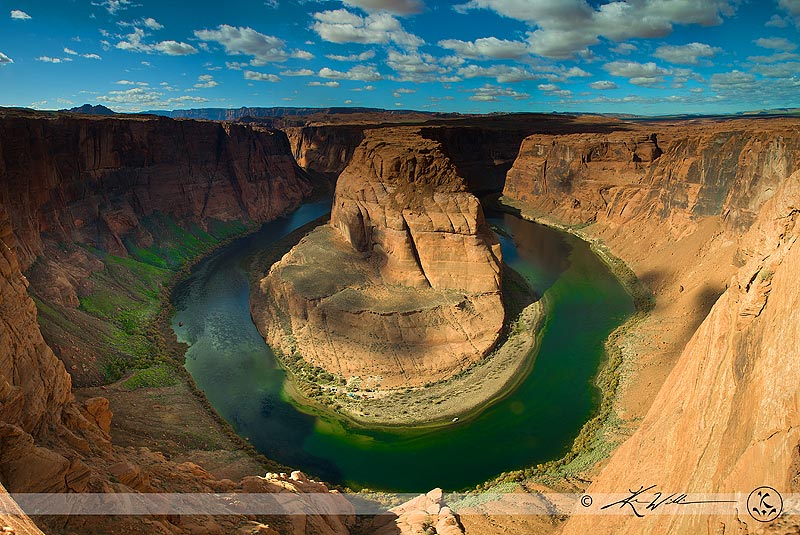 With no real plans or a predetermined schedule, I was able to wander through the very scenic South Park region of the Rock Mountains. Though I've been through this route several times before, I never tire of the views one is afforded in this area.

Little did I know when I started out, my drive would become as much an inward journey as it was an outward one. Four thousand five hundred miles later, not only had I discovered a lot about the beauty of this country, but about myself as well.